The Life & Times of a First Time Soccer Coach 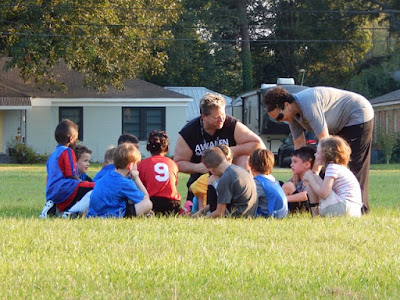 It was never my intention to coach a soccer team of 15 high-energy, easily-distracted 6 & 7 year olds.  All I had on my agenda was getting my 7 year old, Jericho, into a sport and to support him by being present at every game and practice.  And so, in filling out his registration form, I marked "willing to help/assist the coaches of the team."

The league directors lit up when they read that: "Oh, you know what - we need coaches in this age group!"

After declining their invitation, I reiterated that I would help whoever the coach was in any way that I could - even as an "assistant."  I mean, I really like soccer.  I watch it occasionally through the year, and always watch every World Cup and Olympic game that I can. But, I confess, I don't know all the rules nor how the positions are played.  How could I possibly be any kind of soccer coach?

A few days later, the call came. "We still don't have a coach, and you're the only parent who marked 'willing to help...'" No hesitation.  The "yes" just came out. Which is, in a way, strange for me, as I have learned the necessity & healthiness of saying "no" over the past few years.

Those who know me, know that I am a person of prayer. As I prayed, "God, I have no idea why I'm coaching soccer," God helped me understand.  The real reason lies in why my family moved to a community where didn't know anyone a year ago.  To plant a new church... well, yes, but that's not the real reason.  The real reason we moved to Natchitoches, LA, knowing no one, was to be the difference.  Planting a church is just a part of that (a big part, but not the ONLY part).  It turns out coaching a kids' soccer team is also a part of that.

So that's how I approached coaching soccer.  To be the difference in the lives of 15 boys and girls & their families.

I was told by the other coaches and league directors that by the end of the season I would be struggling to pull a team together... that several would drop out, because they always do... So, I set some goals.  Two goals that I expressed to the kids and to the parents: 1) We will have fun, and 2) the kids will learn a couple of basic soccer skills and develop those.  And I had a third goal that I didn't tell anyone else until this very moment: 3) That no one would drop out from our team.

In the end, I had way more fun that I thought I would - maybe even more than the kids! I delighted in getting to know each of their unique and beautiful personalities.  I stood amazed during our last game at how far they had each come in skill-level and teamwork. It was a joy to see their faces when I presented each of them their end-of-season medal, as a unique individualized award in celebration of who they are.  And as they received their rewards, I most definitely received mine!

And my biggest reward is this guy's face during the final game. 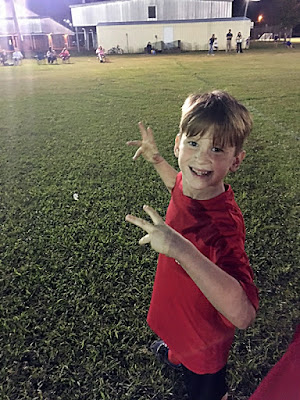