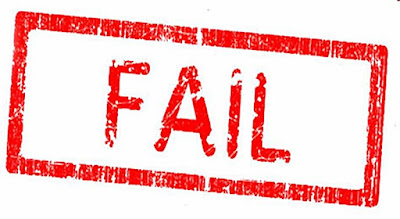 There is a phrase I keep coming across in my reading/studying/training in church planting: "Failure to launch."  This is when a church planter, or church planting team, get a vision, start the journey, work hard, pray even harder, do everything they know to do (and even a few things they don't)... and for whatever reason (usually there are several), fail to get the new church launched.  I'm picking up that this is a big "fear of failure" that some church planters deal with.

There is a quote that says, "Failure is not an option." But the reality is... yes it is an option.

Any time you attempt something, especially something bigger than you, failure is a very real option.

In my experience, failure can be a good thing.  In my own failures I have learned things about myself and others.  In failure, I have discovered a way that would work because of discovering the ways that wouldn't.  Failure keeps me honest, because there are moments when I think I've got it all figured out.  Failure reminds me to keep learning, to keep seeking, to keep moving forward.

How has failure been a force for positivity in your life?