Milestones: #6 A Tallit, a Prayer & the Healing of My Soul

October 26, 2016
Collecting milestones of life/ministry.  These are "moments" when Jesus has changed/guided/shaped my life, which I am now using to build an "altar of remembrance" to Him.  Milestone #6 is an answered prayer that God used in a special way. 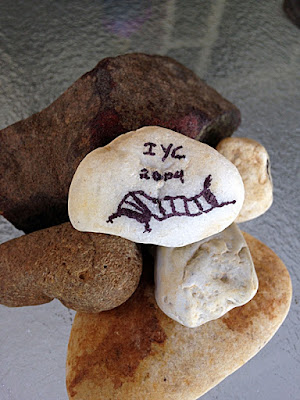 Sometime around the beginning of 2004, I was depressed.  It was worse than that.  I was sliding slowly into a deep depression.  There were a lot of factors that led to this, but ultimately it was burnout and misplaced priorities.  I was over 5 years into running as hard as I could as a youth pastor - I'm talking "no days off" type of running hard.  I lived, breathed, an even slept youth ministry.  If you were to cut me back then, I would have bled youth ministry. Profusely.

They say hindsight is 20/20; a friend recently said "hindsight is x-ray vision!" I came to the realization that my priorities were very out-of-whack in hindsight.  Had I been able to see it then, most likely the depression I was heading into would have been averted.  Without question, the top priority in my life was youth ministry, specifically the growing group of teenagers that God was bringing into the church I was serving.  It was such a top priority that I couldn't/wouldn't see red flags and warning signs - even when they were pointed out.  I shrugged off words of potential helpful correction as "they just don't understand youth ministry."  Unfortunately, in a far distant 2nd place in priority was my family.  And even further down the line was my own personal relationship with Jesus.

I was substituting relational ministry for my relationship with Jesus.  It's no wonder I experienced burnout and depression.

As summer arrived, I led our group on a trip for a week to Nashville, TN, for the International Youth Convention of the Church of God (IYC 2004).  I was neither emotionally nor spiritually in a good place to actually lead.  There were moments of that trip experience that were a complete mess... because on the inside, I was a complete mess.  The growing doubt in my leadership from adults I had brought alongside me, only made things worse for me.  Again, in hindsight, there was good reason to doubt my ability to lead... even if some of the assumptions and accusations that came my way were completely off-base.

I didn't even know how to pray about what I was going through.

Then came the night of IYC 2004, Nashville, that Rob Bell spoke.  I know that since that time, he has made some statements (and written some books) that are controversial, and with some of which I do not agree.  However, for me that doesn't discount the common ground (Jesus is the Son of God, and the Way, the Truth, and the Life) that we stand on, nor the amazing thing Jesus did in my life that night.

Rob spoke a message I had heard him speak before.  I had even adapted his message into a sermon of my own.  It was about a story in Luke 8:43-48, a woman in need of healing who reached out and touch "the hem of Jesus' robe."  This specific "robe" was a Tallit - a prayer shawl worn by Jewish men of Jesus' day.  The teaching is deep, and I won't go into it at length here, but let's just say that it was an act of faith, saying, "I believe you are the Messiah," when she held onto Jesus' Tallit.

The message ended, and as usual a huge area of the facility was opened as a "prayer room." But Rob did something different from other IYC services, which typically host 4,000-6,000 people.  He laid his Tallit on the floor beside the stage, and invited anyone who would like to come and symbolically touch the hem of Jesus' robe.  It was made clear, "there's no magic here, there's no power in the actual prayer shawl... but there IS real power in the Name of Jesus... and there is healing in Jesus' Name."

In a moment where I typically got up to pray with students, I got up, with my wife and with a student... and responded for me.  As I gripped the corner of the Tallit spread out on the arena floor, tears poured from my eyes and a very real healing of my soul took place.  The only words I can find to describe it are overwhelming Peace.

God answered my prayer, and my life has never been the same!  I have learned how to prioritize my relationship with Jesus without making ministry my "god."  I have learned to put my family before the church.  I have learned that regardless of circumstances, God is good, and Jesus is Hope.  And I can tell you, healing is real because Jesus is both the Healer and the Healing.  It may not happen how you think, but when you know Jesus as your Healing, you are changed from the inside out.