Prince: some thoughts, memories and confessions

April 22, 2016
Yesterday Prince died. The musical artist known as Prince... Prince Rogers Nelson (no relation; I checked).  Thumbing through a photo album from when I was a teen, I came across this pic of a part of a wall in my room - the Prince wall. 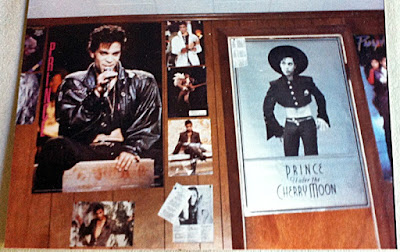 Around 1982 (I was in 7th grade) I heard the song, "Delirious," on the radio. It immediately became a favorite.  Soon after, "Little Red Corvette" began to play, and I loved that one even more.  I really knew little more about Prince other than these songs were on the radio, and I really liked them.  In 1984, the video for "When Doves Cry" came on Friday Night Videos (we didn't have MTV). That was it, there was some connection there. The video was surreal, sensual, and at the same time spiritual, and my 15 year old self didn't know how to deal with it except to embrace it.  In that moment, I no longer "liked these songs by Prince," but now I was a fan.

Summer of '84, the album "Purple Rain" was released and I bought it right away. The opening organ rift with the "Dearly Beloved, we are gathered here today to get through this thing called life..." intro sucked me into a journey that would last years.  I couldn't stop listening. I know I wore out at least three copies of "Purple Rain" on cassette (if you don't know what a cassette tape is, Google it, kids!).

Because I loved "Purple Rain" so much, I went back and bought the "1999" album. I was blown away; even the cover art was like a never-ending story. It was then I began to read articles about Prince - anything I could find, and collect posters and such. Prince intrigued me. He had taught himself to play guitar, as well as many other instruments, and he released four albums BEFORE "1999" what? I had to hear them, so I bought them: "Dirty Mind" first (admittedly because at the time, I had never seen an album with a warning label before: "Warning! Explicit lyrics!"), then "Controversy" (which I loved almost as much as 'Purple Rain"), then the self-title "Prince," and finally his very first album, "For You."

By this time it was 1985 and Prince released the album "Around the World in a Day," with the amazing pop songs, "Raspberry Beret" and "Pop Life" (which I would put up against ANY pop song even today!), but what drew me in deeper still was a song called "The Ladder," in which Prince sings "everybody wants salvation of the soul" and about "time spent alone with my friend, Jesus."

This was it I think - a teenage boy searching, as teenage boys are prone to do, for identity.  With all these questions and feelings going on: how do I know that is true? why do I feel this way? is there something wrong with me? In the adolescent quagmire of sensuality, spirituality and just life in general, Prince made me feel like I wasn't alone. Either he really got me, or I really got him. Either way, the lyrics of his songs and the lines from his movies "Purple Rain," "Under the Cherry Moon," and "Graffiti Bridge" became dominant in my conversation. Seriously, ask anyone who knew 16 year old - 20something year old me, and they first thing they will say about me is, "Stephen loved Prince."

Every Prince album following that was mine on the day it was released: "Parade," "Sign O the Times" (with the amazing song "Starfish and Coffee" and the very Jesus-focused "The Cross"), and "Lovesexy."

1988. The "Lovesexy Tour." I went to see Prince live in concert in Cincinnati, OH. Mind is still blown. How amazing to be alive in the era that Prince was making music!

Then Prince did music for the 1989 movie "Batman!" By the way, probably the second thing people who knew me back then would say they remember about me is, "Stephen was crazy about Batman."  Anyone else feeling how this all just lines up a little too perfectly?

If Prince had his hand on it, I had to have it. He wrote numerous songs for various artists and I had to have each one.  A number of artists did covers of his lesser-known songs, and I had to have those too. And anything released by Prince's proteges or on Prince's "Paisley Park" record label I bought immediately! Favorites were: Mazarati, Madhouse, Wendy & Lisa, Jill Jones, The Family, and of course, Sheila E., and Morris Day & the Time.

Over the next few years, 1990-92, Prince released "Graffiti Bridge," "Diamonds & Pearls," & "the symbol album." Now I was married, and sharing my connection to Prince with my "Most Beautiful Girl in the World," Shelly. If we would have had a child then, there is little doubt that he/she would be named something influenced by Prince.

In 1994, I was working full-time in a retail chain store that sold music. That's when I purchased what would be my last Prince album, "Come." Something was changing, maybe with Prince but definitely with me. It was during this time I began to really listen to God speak to me in prayer and the Bible. No one else had to tell me (and I wouldn't have listened if they had); it became clear to me that I had a false god that I was worshiping and it was the music I listened to; and I had real idols, aka "icons," of which the main one was Prince. Maybe I connected with Prince because my heart & mind resonated with his art, or maybe I connected with Prince because his art influenced my heart & mind... either way, I came face to face with the reality of what worship is, and I had spent years giving it to Prince instead of God.  My view of spirituality & sexuality wasn't  informed by the God who created us, but by Prince. When I confessed that, I changed. And I needed a reset to my soul. I'm not saying everyone has to do what I did next, but trust me, I had to. I stopped listening to Prince. I sold my CDs to a used CD store. Working in the music store, I heard his next few albums as we played in-store.  No arguing he was a musical genius, but I had most definitely changed and Prince didn't travel this part of the journey with me.

As an aside, I listened to the infamous "Black Album" once, but never purchased it when it was finally released because Prince had sent the message, "Don't buy the Black Album. I'm sorry." in the video for "Alphabet St."

Between 1999-2010 Prince released 12 albums, of which I have heard none. During these years, I slowly began to add a few Prince songs back to my music collection via iTunes. I had given all of it (except my collection of vinyl 12' singles) up, with the promise I heard in my heart: "What you give up to God, He will give back in time when you're ready... or He will replace it with something better." This promise is true, and I am so happy it is! Over the past few years, I have found myself rekindling a love for the music of Prince, but completely in its right place.  When it comes to art, one can be discerning, and if the heart is where it is supposed to be, there is no separation of "secular" and "sacred," because when I am all God's, everything is spiritual.


One of my favorite things about Prince is realizing that he continued to grow spiritually, too. At times, almost as if he were a lamb in wolf clothes - drawing you in with art, outrageous-ness, and sensuality, then hitting you with "don't die without knowing The Cross."  A favorite interview of mine was when he was talking about the song "Let's Go Crazy," and said, "That song was about Jesus and the Devil fighting for our souls, but if you sing a song about Jesus they won't play that on the radio, so I used different words."

In 2014, I heard the song, "Fixurlifeup" and again felt like, OK, either Prince gets me again or I get him again... either way, "You'll always get the dream you deserve from what you value the most." I've learned to value Jesus the most, and I pray that Prince did too.

So much more I could say. But I'll save it until later. Because in Heaven there are no stars and fans. We can talk then.