March 04, 2012
Lent is the season of fasting and prayer which prepares the follower of Christ for the unique celebration of His Resurrection on Easter Sunday.  As I mentioned in a previous blog article, what one fasts, or "gives up," for Lent, should be something of a sacrifice; something from which pleasure is taken on a regular basis.  For most folks, this is some food item or type of food.  For others, it is a specific "vice." Fasting doesn't take place on Sundays, as Sunday is the "Feast Day" or considered a "Mini-Easter."  Whatever one gives up for Lent, one is to redeem the time spent on that activity with renewed focus on Jesus and His Way.

This year, I prayerfully chose to fast social media.  Which led to a funny conversation in my Sunday morning discipleship group, and this very tweetable line: "So, what is 'social media' anyway?"  FYI, I am specifically fasting Twitter and Facebook... by process of elimination.

-Coffee. For those out of the loop, I am no longer addicted to coffee.  I am now what one might call a "social drinker."  Using a vitamin supplement called SPARK, produced by Advocare, I don't drink caffeine on any kind of regular basis, with absolutely zero side-effects such as headaches. Not a sacrifice.

-Sweets.  For about 7 months I have been living the "Fit Forever" lifestyle, with Sunday being my "free day."  So, with a few exceptions along the way, I only eat sweets on Sundays anyway.  Not a sacrifice.

-Chips.  I have to admit that this is a good one.  I gave up chips for Lent last year and realized how often I include chips in my meals and snacks.  However, my consumption of chips looks a lot different than it did last year, although I must admit that I probably still eat them more often than I should.  Still working on getting these relegated to "free day only" status.  Would be a sacrifice, but not as meaningful as last year.

-Mexican food.  Yes, I love it.  But can easily go a week or longer without any... especially since I know a number of Cuban & Colombian recipes. :)

-Social media.  Not long ago, I took a week-long break from updating my status.  I also recently discovered how treacherous reading the Facebook news-feed can be, so I've already cut back on that.  The truth is social media is an amazing tool to encourage others, share information, and live out the Christian faith.  A great tool... but a nasty, and addictive, drug.  I realized I was checking in, especially with Twitter, several times an hour.  I've gone from using social media as a tool, to "using" social media like a drug.  Now that I've come down from the high, I'm certain that when I return, it will be with new perspective and boundaries.

Meanwhile, every time I think, "that would make a good tweet" during Lent, I pause and reflect on Christ's death and Resurrection. 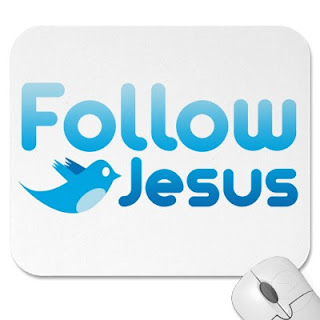