October 04, 2010
"Walking down the street, Jesus saw a man blind from birth.  His disciples asked, 'Rabbi, who sinned: this man or his parents, causing him to be born blind?'  Jesus said, 'You're asking the wrong question. You're looking for someone to blame.  There is no such cause and effect here.  Look instead at what God can do.  We need to be energetically at work for the One who sent me here, working while the sun shines.  When night falls, the workday is over.  For as long as I am in the world, there is plenty of light.  I am the world's Light.'  He said this and then spit in the dust, made a clay paste with the saliva, rubbed the paste on the man's eyes, and said, 'Go, wash at the pool of Siloam' (Siloam means 'sent').  The man went and washed - and saw.  Soon the town was buzzing.  His relatives and those who year after year had seen him as a blind man begging were saying, 'Why, isn't this the man we knew, who sat here and begged?' Others said, 'It's him alright!'  But others objected, 'It's not the same man at all.  It just looks like him.'  He said, 'It's me, the very one.'  They said, 'How did your eyes get opened?'  'A man named Jesus made a paste and rubbed it on my eyes and told me, "Go to Siloam and wash." I did what He said.  When I washed, I saw.'" - John 9:1-11 (Message)

See, this is why I love Jesus so much.  His disciples want to know whose fault it is, and Jesus turns the situation into one of the greatest teaching moments in the Bible.  "Why does it have to be anyone's fault?  It's not anyone's fault.  You're asking the wrong question."  Could Jesus be saying, "Dude, life happens.  Instead of looking for someone to blame, look for a way to bring light and truth and love into the situation."

Here's how it may look.  Question everything.  Seek the answers in Jesus.  Listen to what Jesus says and act upon it.  Do as Jesus instructs (like the blind man who went and washed).  And tell others that you're the same person, but in a sense, totally new... that when you met Jesus, and followed His path, you got washed clean and you now see you things like you never did before!  I think Jesus would smile at that. 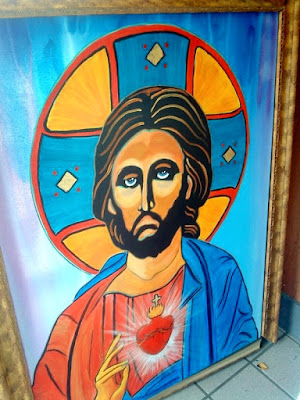 Unknown said…
Great post, Steve. this passage has intrigued me for a while now, and I truly appreciate your take on it.
9:37 AM