"Don't ask me to leave you and turn back.  I will go wherever you go and live wherever you live.  Your people will be my people and your God will be my God.  I will die where you die and will be buried there.  May the LORD punish me severely if I allow anything but death to separate us!" - Ruth 1:16-17(NLT)

I've done weddings in backyards before.  Actually, I've done more backyard weddings than church weddings.  So, that didn't really seem out of the ordinary to me.  But when I read the start time of the ceremony to be 3:31 PM, I should have known something was up.  As I welcomed everyone and introduced the bride and groom, the bride's two daughters... adult daughters, mind you... burst into song.  Just as I thought this must be a joke on mom & dad-to-be, mom herself (yes, the bride) joined in.  I thought maybe I had stepped onto the set to Grease III - The Wedding or the Rocky Horror Wedding Show.  Taking my cue as a proper traditional pastor, I improved my own musical ode to the moment when I busted out the Black Eyed Peas, "I gotta feelin... I gotta feelin'... that tonight's gonna be a good night... tonight's gonna be a good, good night!"  Yes, I sang.

Then we get to the part where I ask them to exchange rings.  He places the ring on her finger and it's all good, right?  So, when I ask her if she has a ring for him, she says, "Well, he's already got part of it."  Yeah, I had the same blank look on my face as you do right now.  The groom holds up his hand showing a ring tattoo around his ring finger, and says, "I've just got to get the stones done."  At which time, he walks away... yes he did! ...the groom walks over to a porch where the bride's son... adult son, mind you... finishes the ring tattoo on his dad-to-be.  A tattoo in the middle of a wedding ceremony - Incredible! 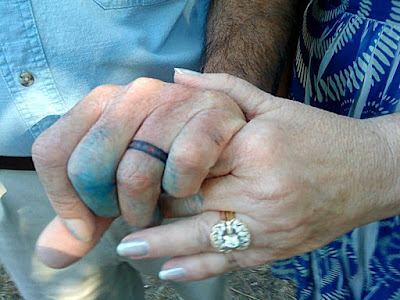 I totally took this photo with the camera on my phone and uploaded it to Twitter& Facebook right then. Yes, while performing the wedding.

And the whole thing ended with all the kids lining up and the groom's 90-something year old dad handing out a quarter to every single one of them!  I ended up with my 4-month old's quarter in my pocket.  What a great wedding with some great people!  Afterward, the groom said to me, "Unpredictable and fun; that's how I expect this marriage to be."  I love it!  And... I got a feelin' that tonight IS gonna be a good good night! 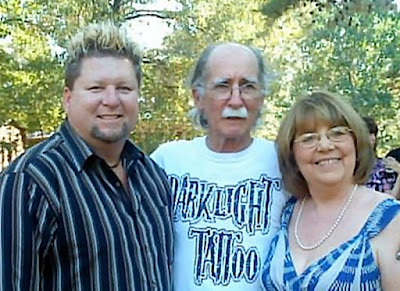 Sarah said…
enjoyed reading your post. that's my family (groom's side) that you are talking about, and yes they are amazing. My grandfather has been giving "grandpa quarters" my whole life and i believe it started with the oldest grandchild who is now...50?!? There are around 30 of us grandkids, not to mention great and great great! It is an amazing family to be a part of, and God has truly blessed us.
4:10 AM