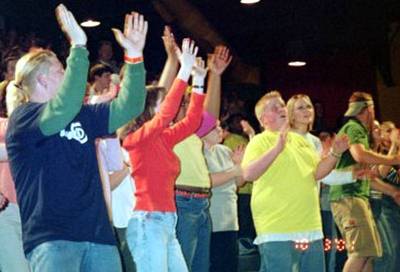 The above photo is from a youth convention in 2001... and yes, that is yours truly with the ponytail.

One of the biggest battles within Christian congregations is "worship style." Now, one on the outside looking in, may be wondering, "Battles? Isn't there enough going on in the world to not be having battles amongst yourselves?" One would think so... wouldn't one. Never the less, this is an issue that has caused major fights between people who have chosen to continue the mission of Jesus (yes, that was a loaded statement; read it again if you like).

Most people in emerging generations understand that the word worship has been taken out of context, and that it really has more to do with how you live day in and day out than what songs you sing or what rituals you partake in once or twice a week (more or less). The "worship wars" of these past few years have really nothing to do with worship, and everything to do with style.

Some prefer to sing the same good ol' songs from a hymn book week after week, and they have their favorites (but you better not preach a sermon more than once no matter how much they like it

). Some prefer to sing songs which are current, as in written and made popular in just the past few years, and they also have their favorites (and again, be careful about preaching a sermon twice to these folks too

). Some prefer to stand, lift their hands, clap, and maybe even... dance *gasp*

. Some prefer to sit... and sometimes kneel. Some prefer that there be no annoying singing so that we can hurry up and get the preaching over with.

Some prefer to sleep 'till noon, crack open a beer, and watch the game on tv (yes, I am still talking about worship styles).

A sweet lady in our congregation said to me a while back, "Pastor, I don't really like the way our music program is being done lately." My reply was, "Neither do I." As our conversation continued, I attempted to make it plain that while she wanted to sit during every song, which would come only from the hymn book... and completely without bass and drums... that I wanted to be on my feet, jumping for joy, dancing to every song, which would only come from contemporary artists... and completely without the organ. She prefers a funeral; I prefer a rock concert. And we're obviously meeting somewhere in the middle.

It's not about me, is it? Isn't it about the One being worshipped? How have we gotten so far off track?

Unknown said…
In 1 Peter chapter 4 we are told to think like Jesus. These are his words on the subject...
"Then you'll be able to live out your days free to pursue what God wants instead of being tyrannized by what you want."
Enough said, huh?
10:56 AM

I took this selfie during a short break between groups, as I led 4th & 5th graders in afternoon field games in the Louisiana heat last week. The shirt I'm wearing is from The Global Gathering of the Church of God, which took place in Anderson, IN, a few years ago.

The significance? At the exact same time that I took this pic at Camp Pollock, LA, the Global Gathering was once again taking place, this time in Orlando, FL.

When it was announced the Global Gathering would be held in Orlando, I doubt there was anyone more excited than I was. The Global Gathering of the Church of God is a wonderful event that I never want to miss. Orlando is my favorite city in the world. And the dates of the event coincided Shelly and my 29th wedding anniversary.  I immediately began to dream and plan on how we could attend the Global Gathering, and then tack on a much-needed family vacation as an Anniversary gift to ourselves and our boys.

Financially, this would mean cutting even more corners an…
Read more

March 13, 2010
So I created quite the Facebook stir by posting the link to this news story about a teenage girl in Mississippi who wants to attend her high school prom with her lesbian girlfriend.  So yeah, they are both lesbians... just to clear that up.  In case you missed the article click HERE.
The "stir" on my Facebook page was a back and forth debate between judgment and grace.  Many want to make this a debate about "right and wrong."  I feel that it's much deeper than that. After posting the link and asking what others thought about it, I spent the rest of the day away from the internet in meetings (during which time we actually discussed this very story/issue).  Upon returning to the flame-session/love-feast that I had instigated, I found numerous requests for what I thought about it.
I am much more of a feeler than a thinker... but I try.
#1 - my heart breaks for this young woman.  To be told "we don't want you" must be one of the most painful things to…
Read more